Back to Improvement Stories
LifeQI

He was joined by his team - Monica Huerga (Assistant Psychologist), Cassie Hazell (Lecturer in Psychology), Zareena Ahmed (postgraduate student) and Roman Hamza (postgraduate student) who highlighted the implications for early intervention CBT of the prevalence and cognitive predictors of physical harm in the early stage of psychosis. The results will be further distributed through CNWL and Pan-London Early Intervention in Psychosis clinical networks and publications in international journals. 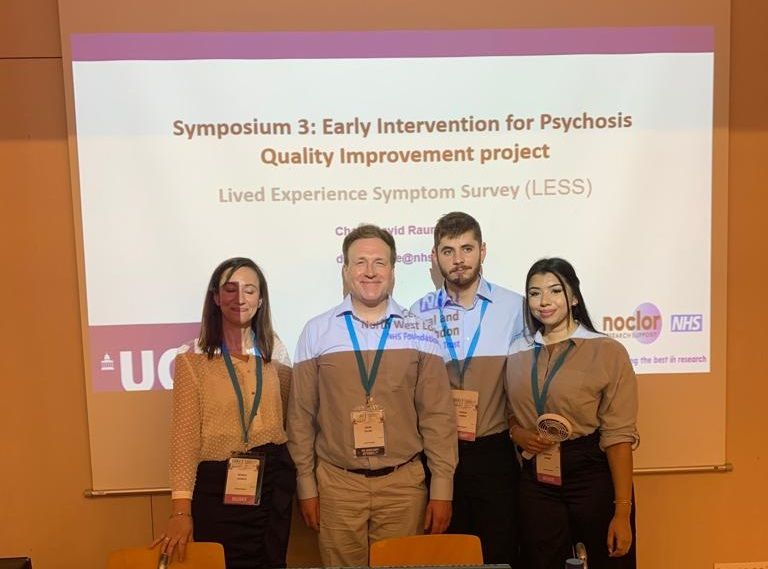 This information is important for CBT so that practitioners can know:

The team looked at the case notes of 273 of their patients.  They found out that one third of patients had actual physical harm influenced by delusions/hallucinations with another (at least 20 percent) who had potential for actual physical harm. The rates and type of physical harm also varied according to the symptom. Neglect, for instance not eating, drinking or sleeping was the most common physical harm at about 20 percent, which surprisingly was often influenced by rare hallucinations.
When looking back at the findings, certain micro delusion or auditory hallucination (hearing voices that aren’t real) cognitive features retrospectively predicted a significant increase in the likelihood of physical harm in the cases history. This included an increased risk of violence by three times towards other people with certain delusional features and a 20 times increased risk in self-harm for one aspect of auditory hallucination content. The team were also able to find the exact prevalence of all types of physical harms for each symptom and cognitive feature.