This article focuses on the Plan Do Study Act (PDSA) cycle to explore what it is and how you should use it in your QI project.  Let us start with a great quote from The Institute for Health Improvement (IHI), adapted from William Edwards Deming.

Every system that we work in, so including health service systems or service settings, produces output or performance exactly as it is designed.  This is an important concept in improvement work because if you want a different output or result, you have to change the system in some way.  This is where the PDSA cycle comes into play, to test changes to our system in a methodical and mindful way. 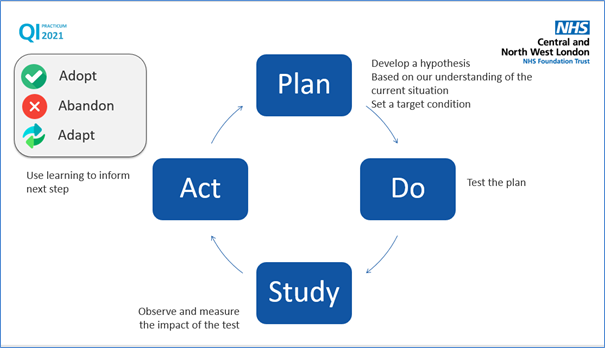 A PDSA cycle is systematic approach to ‘trying out’ or testing a change in your system, consisting of four stages:

Plan – think about what part of your system you want to test and what it is that you are going to do differently.  You can at this stage, develop a hypothesis about what you think will happen when you make the change.  An example of this might be a change to an assessment form; ‘if we fill out the form with different information or in a different way, we think that the assessment process will take less time to complete’.  You also need to plan who is going to test your change, when the change is going to happen and how you are going to collect information (data) about whether the change makes an improvement.  So, in the assessment form example, you would assign someone to try the form out and ask them to note whether the form was easier to fill in and to record how much time it took them.

Do – literally you ‘do the test’, so your assigned person uses the form and makes those observations about ease of use and time taken.

Study – compare what actually happened in the do stage with what you predicted would happen in the plan stage.  In our example, ask yourself if the time to fill in the form decreased as you wanted it to and also was the form still easy to use?  In effect you are analysing what happened in your PDSA cycle.  You can then ask yourself if you wish to Adopt (keep the change because it worked), Adapt (try something similar in your next PDSA, but ‘tweaking’ it because it did not fully meet your predictions) or Abandon (because it did not work as well as you hoped that it would).

Act – in this stage you use your thoughts from the Study stage to inform what you might do in the next PDSA cycle.  You may choose to test the form again at a larger scale or in a different way (such as another member of staff testing it) or you may change it and re-test or decide that the test is not going to work and stop doing any further testing.

So, knowing what a PDSA cycle is, how do we apply it?  To do this we need to think about the list of change ideas that we have developed on our Driver Diagram, deciding which of the change ideas might have greatest impact on our aim and starting to test that aim first is a good way to start. 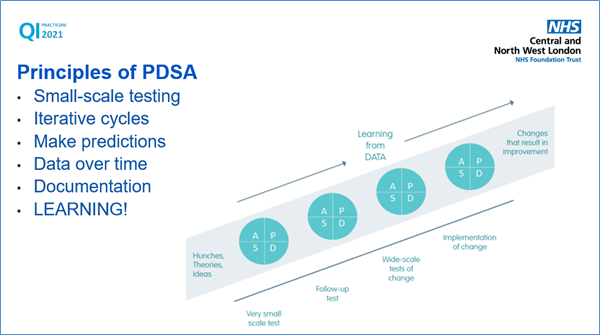 Once that decision is made, we use the PDSA cycle in an iterative and repeated process that we refer to as a PDSA ramp, which is quite simply a set of consecutive PDSA cycles; each cycle providing you with more knowledge about what works and what does not, leading to an overall improvement in your system.  As you progress through the cycles, it is recommended that you increase the scale of your testing; from ‘small to all’ as we say.  By the time that you have done enough cycles, you can be confident that your change is making a consistent improvement.  You may need to gather data specifically to do this.  In our example you may wish to plot a chart of data points of how long each form takes to fill in.

In summary, PDSA cycles are used in ramps to test out our change ideas and in so doing, learn about what works to help achieve our project aim and just as importantly, what does not work or help.  It is easy to feel down-hearted when a PDSA does not work or fails to make an improvement, but it is better to think of such an outcome as good learning; we have ‘failed forward’ by learning what does not work. And that is something that is very positive!

Three final words: document, document, document!  Whether you capture your PDSA records on paper or any other means, it is really important to get into the habit of recording your PDSA cycles on the Life QI system and this will pay dividends as you get further into your project.  Memory about what you learnt at the start of your testing may not be perfect after three months of working on PDSA ramps?  The PDSA tab on your Life QI project is designed to lead you through recording your PDSA cycles and this is invaluable for when you want to tell your QI story by developing a QI poster.  So, we recommend that you get familiar with using the facility on the system and get into the habit of filling the boxes in on a regular basis as you do your PDSA tests.

Don’t forget that a QI coach can help you work through your testing using PDSA ramps or alternatively, book a QI Clinic slot and discuss your plans with members of the QI Team.

For support or further information on any aspect of improvement work in CNWL, please contact the QI Team in the Improvement Academy at: