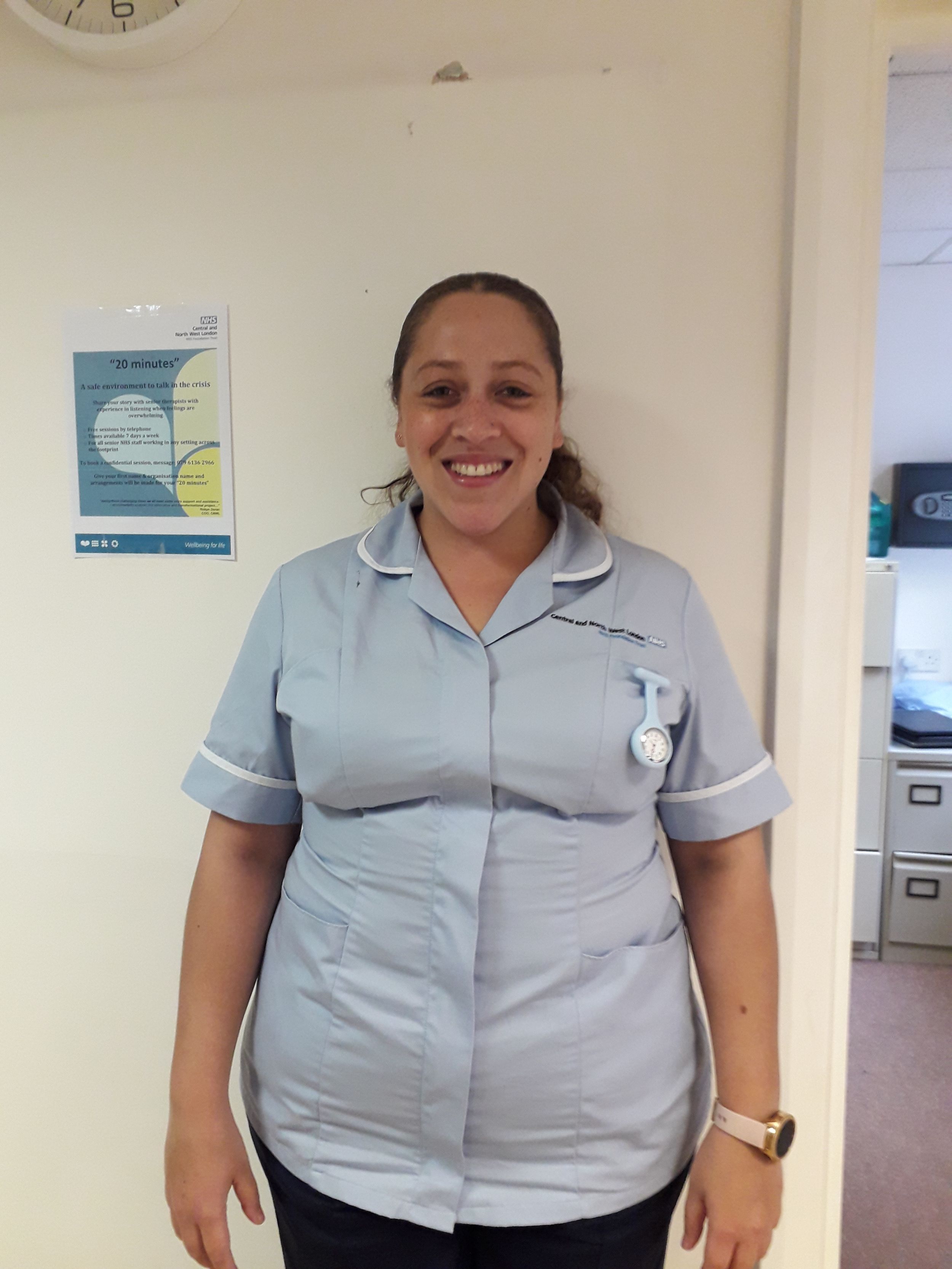 Bianca Hall is exactly where she wants to be – serving the community she grew up in.

A Camden girl; she went to school in Camden and for most of her nursing career with CNWL has worked in Camden  as a Specialist Community Public Health Nurse and Nurse Prescriber, though currently is temporarily redeployed to district nursing at Belsize Priory Health Centre.

“I love my job, I love coming into work and I love baby clinic. I am doing exactly what I want to do and where I want to do it,” she says. Bianca is also the Band 7 lead Health Visitor for the Kentish town child and baby hub which utilises a new style of baby clinics and played host to the health secretary Matt Hancock who praised the work the team are doing in changing the face of health visiting clinics across the borough.

“In the clinic we focus on the interaction between parents and children. These are very successful.”

Bianca was part of the pilot group of health visitors who began a new antenatal programme in Camden called bump to baby. Bump to baby is a five-week programme in which parents learn about bonding, brain development, coping with crying, postnatal depression and support and jointly delivered programme between Health Visiting, Midwifery and Camden family support team. The pilot was a huge success and the programme has now been running for over three years and has funding for another two!

She’s come a long way since she started working for CNWL, initially as a receptionist at Belsize Priory Health Centre in 2008 so the redeployment was a bit like a meeting of old friends as familiar faces are still working there and her new manager - Lizzie Mander – was her manager when she first qualified.

“It feels like I’ve come full circle,” she says, adding. “I’ve done about 10 new baby visits where the mum or the dad was someone I went to school with.”

Back in 2008 Bianca, who is normally based at the Agar Children’s Centre, in Wrotham Road, was working in a record store but wanted a new career. Her aunt was working at Peckwater health centre and had heard there was a vacancy as a receptionist.

After nine months, during which she admits she admits she was becoming bored, she was able to secure a new position in administration with the health visitors at Gospel Oak,  which became a permanent role in September 2010 when she moved to Hunter Street Health Centre in the same role.

“I still felt it wasn’t enough,” she says. “I remember helping with a clinic with two health visitors. One mum asked a question, which I knew the answer to but I couldn’t provide any advice because I wasn’t trained. At the end of the clinic, one of the health visitors, Nancy Jarira, took me aside and said that if I wanted to do more she would support me to become a nurse, which she did.”

Her first base was the James Wigg GP Practice in the Kentish Town Health Centre, which used to be her own GP practice.

In 2017, Bianca decided to build up experience by working outside of Camden and took up a post in Westminster.  Although only there for a year before gaining a promotion in Camden, she recalled holding a clinic in Westminster during which a parent asked her to sign a baby memorial book.

“They wanted their son to know what I had done for them,” she said.

However, Camden is where she feels she belongs. “It’s all come full circle for me. I love that I can walk around Camden and people recognise me and recognise me as a health visitor. I’m a piece of the community and I’ve always said I wanted to better my own community and nursing has enabled me to help my community; it’s given me purpose.”

She adds she’s thankful for the people who pushed her to get her to where she is now. “People have recognised something in me and have pushed me and helped me to reach my potential,” she says.