CNWL staff were part of the team meeting refugees from Afghanistan at Heathrow airport last week.

They were there to greet and offer health checks, provide covid testing and mental health screening. 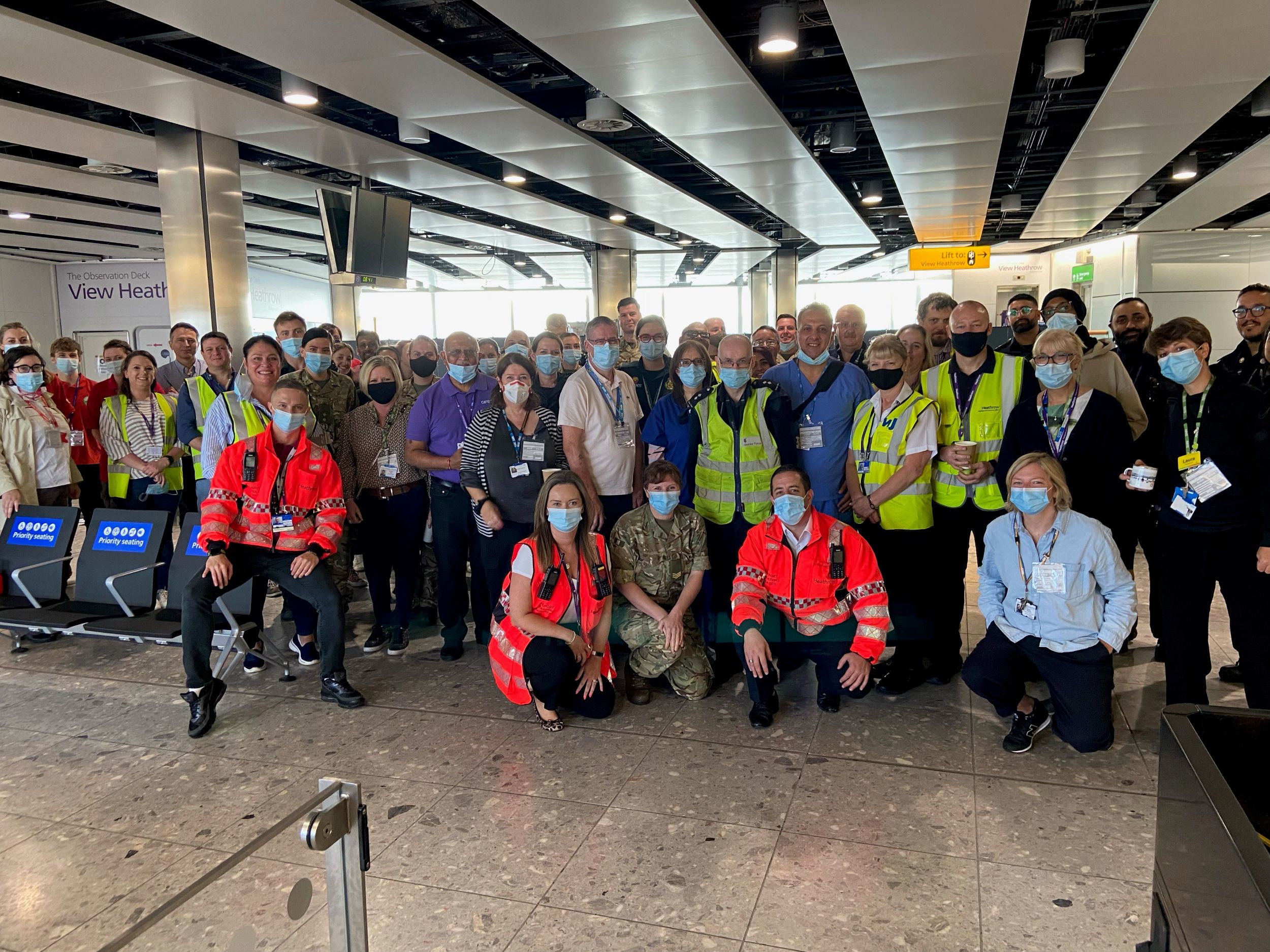 They met five flights and thousands of people.

Emma Kennedy said: ”I am part of CNWL, who were at the airport (Thursday and Friday received 1300 passengers) checking out whether any of the arrivals had symptoms of PTSD or trauma. The team were from the  Grenfell NHS service.

We found very traumatised passengers. Initially we were finding really angry and tired children so we set up some Art Therapy provision and a table for the children who were all struggling with very tired parents. They spent the time (average 5 hours), the border control processing time creating art work which helped regulate some of their emotions. 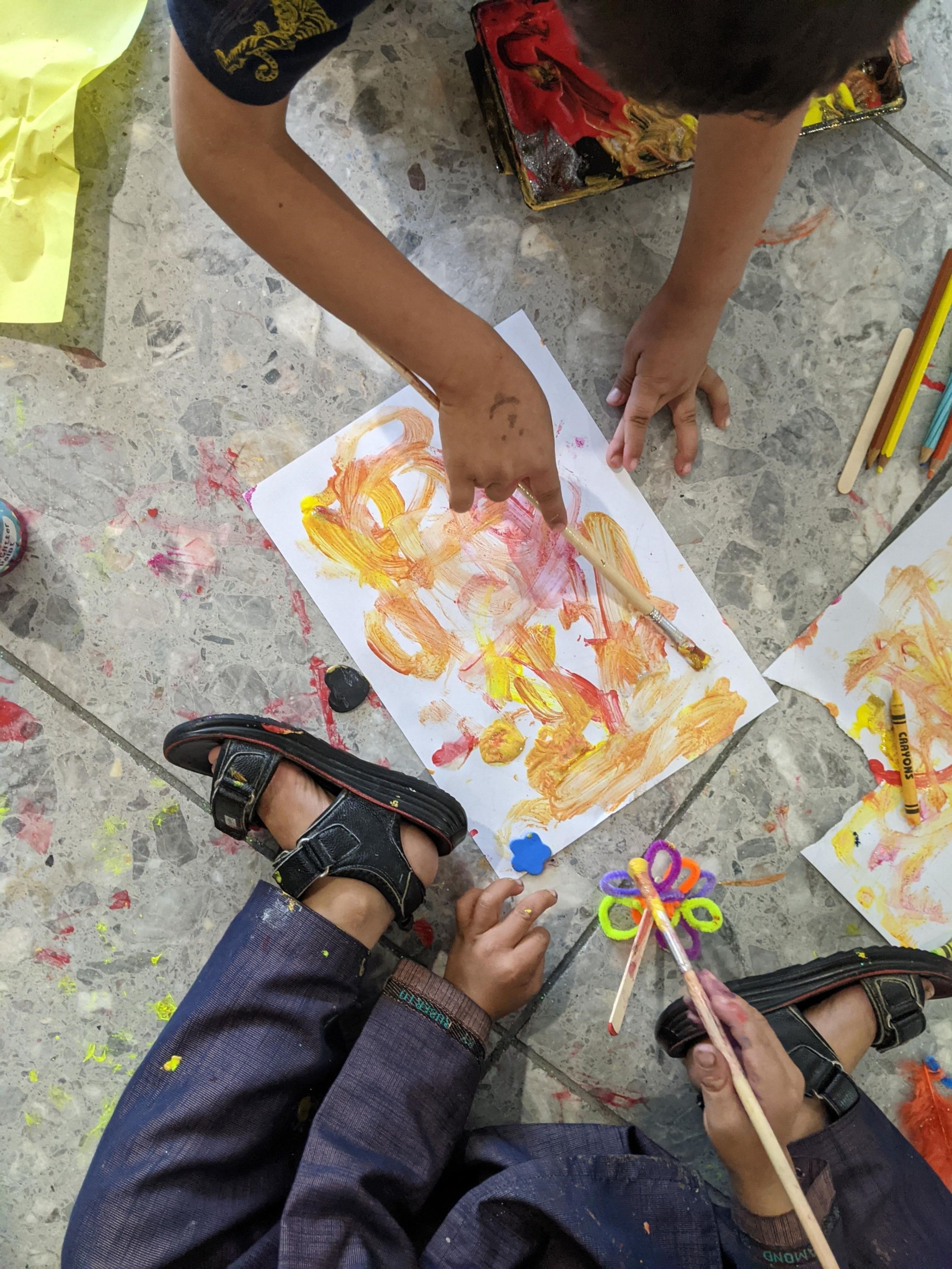 I would describe the parents as shell shocked. We had a clinical psychologist (who has led on our Grenfell recovery) who guided the staff to provide Mental Health First Aid.

This week we will agree with NHS England the provision to follow up all the arrivals for a further psychological checks.

“We co-ordinated  with the Red Cross and Mitre who are providing practical and psychosocial support and CNWL services in Hillingdon are ensuring that all the immediate physical health and emergency care needs are being met within the acute services.”

“However, we know that many of our clients and staff will also be directly and indirectly affected. This may be due to having family members and friends who are trying to escape, those who will be unable to and many reminders of their own past trauma.  At this stage our priority is to ensure that we have identified any support needs for our clients.”

Those arriving in the UK will be placed in hotels for Covid quarantine for 10 days and then relocated. This may be to family members if they live in the UK.

Arts Therapist Laura Knight said, "By offering a space to allow the children to draw, paint and focus on making an image, the NHS Arts Psychotherapists provided the children a calming space amidst the chaos, to regulate and unconsciously process the multitude of emotions & experiences they would have been exposed to simply in the past 72 hours. It was important they were given permission to "make a mess" in a contained safe way, and when many spoke little English it gave a shared language.” 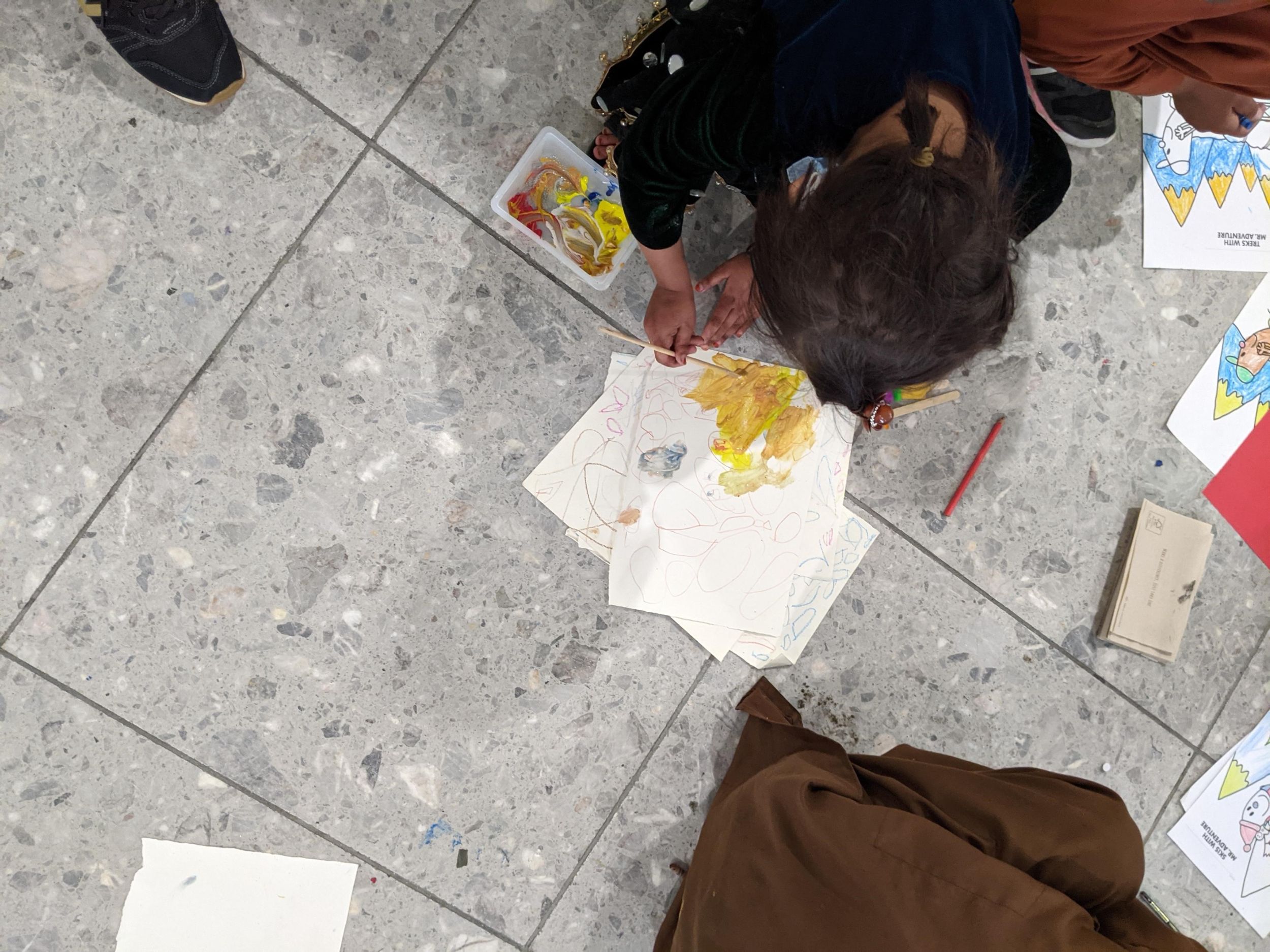 "Through eye contact and body language  , even with our masks on, we could give praise, recognition and a sense of achievement to every mark made on the page". 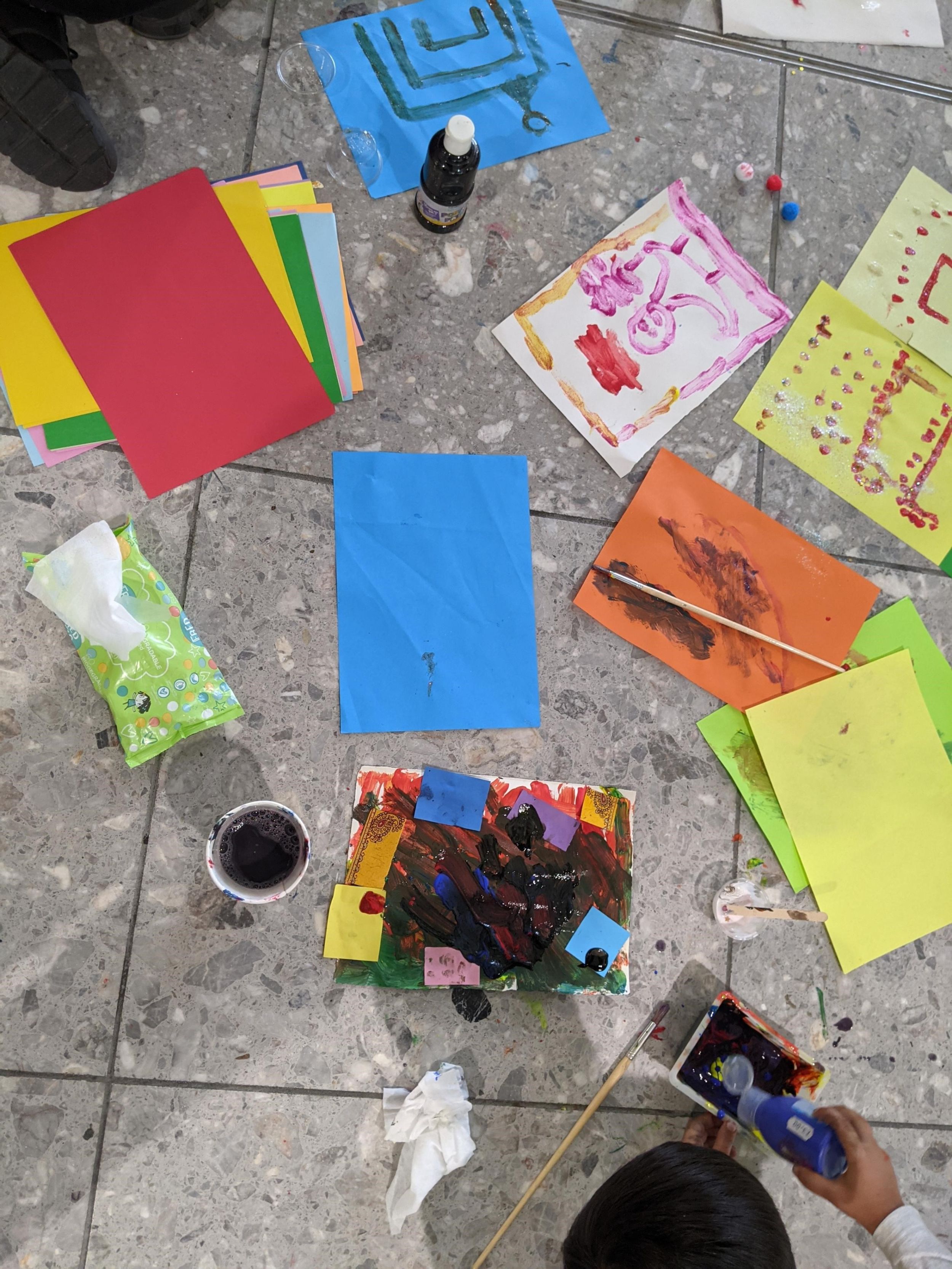 Whilst the children did art, it gave space for the parents to go through the medical examinations, processing their papers and starting to come to terms with landing in the UK. 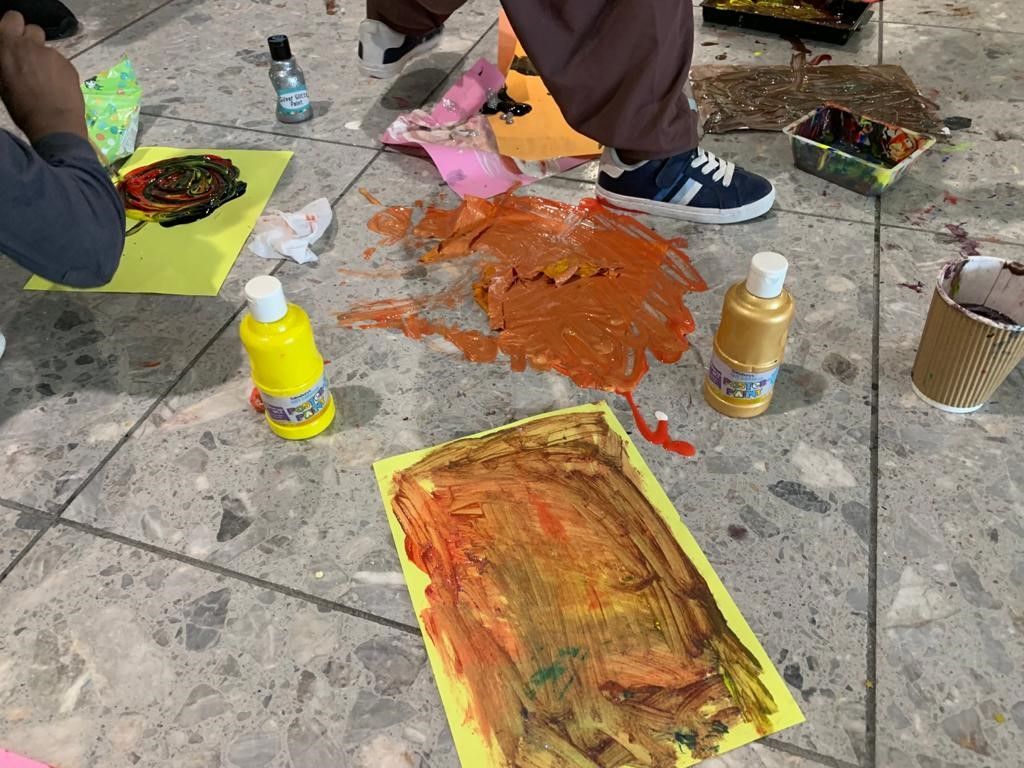 Rosie Stevenson, Senior Occupational therapist, said, “Firstly, I would like to say what a privilege and humbling experience to be able to help in some small way.  We observed passengers as they arrived initially, locating women with babies, making sure their basic needs were met.  People reported that they had been wearing the same clothes for days as they left with just the clothes on their back with few personal belongings in black bags. A number of children were not wearing shoes or appropriate clothes for UK climate. We worked closely with the Red Cross and the Heathrow Welfare team handing out clothes, food and blankets.   We worked with the medical team to triage individuals.”

“We looked for those who were stressed and offered psychological first aid. They gave us first-hand accounts of their harrowing and disturbing encounters, also showed us mobile phone footage of what they had witnessed at the airport bombing in Kabul. We listened to personal stories of trauma and loss, and all we could do was to listen and show compassion and humanity in the face of such horror.

“I sat with a man who was crying and distressed as he was split from his family in the airport. He came and thanked me for the support before he left.

“We spoke to families who were very happy to be in the UK but felt guilty for leaving loved ones behind. One man wants to continue his farming tradition, he spoke enthusiastically about wanting to grow grapes and apples. He wants his family to have a good life, work hard to earn a living, he wants his wife and daughters to have the opportunity to be educated and be self-reliant.

On a final note, Kindness, humanity and compassion cross all cultural and religious barriers

Robyn Doran, CNWL’s Chief operating Officer, said, “the  team were amazing, responsive, highly skilled and flexible and we were lucky to have them as part of the core team in Heathrow. Thank you all.”

Thank you  to all on Vanessa Odlin’s team at Terminal 4 (and thanks to all those putting themselves forward to help). 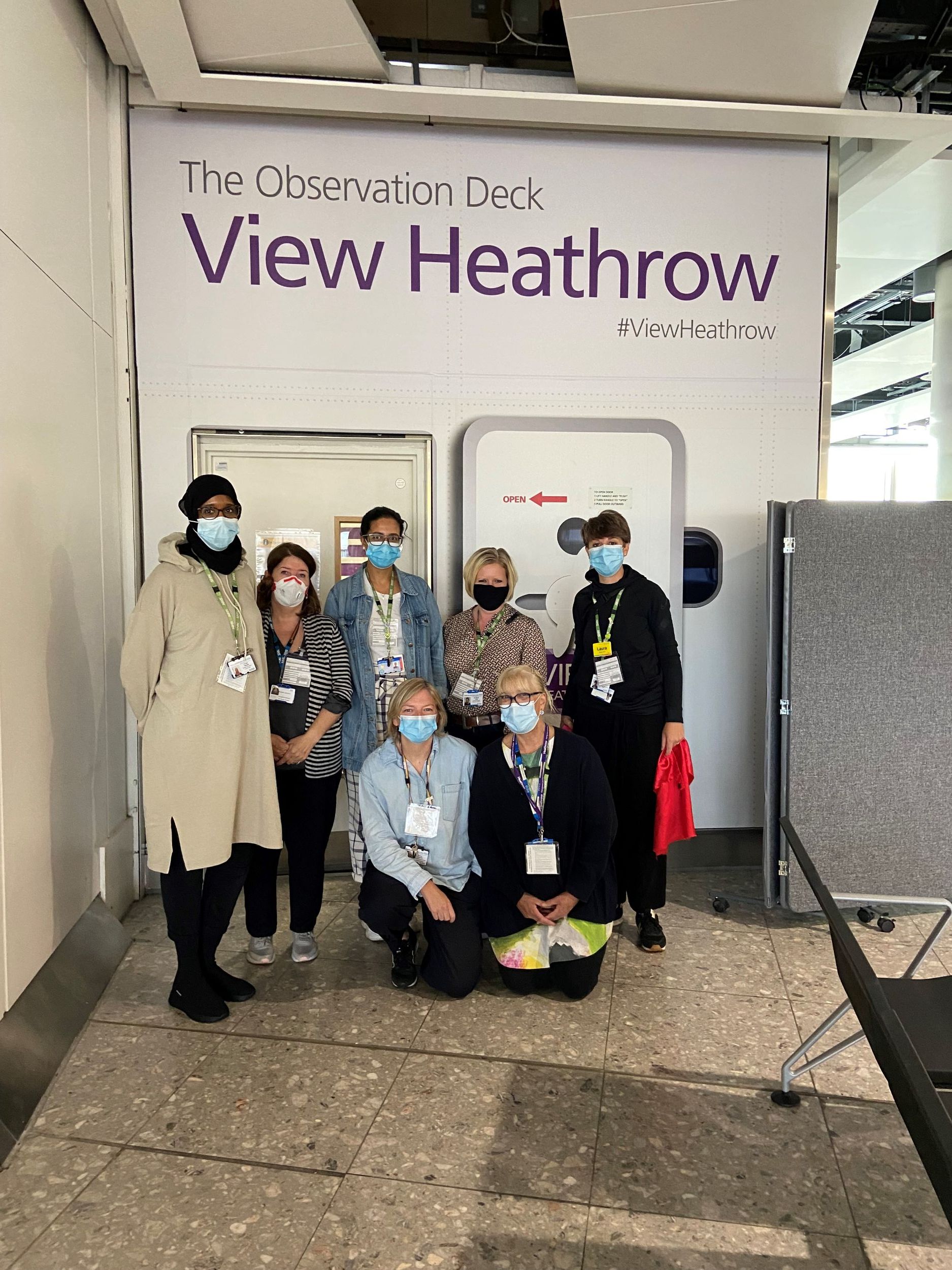