This week marks National Volunteers Week which runs from 1 to 7 June. It's a chance to celebrate and say thank you for the contribution volunteers have made in CNWL.

At CNWL, we’ve taken on over 100 volunteers; these include our supportive community that have come in to help CNWL and also NHS and CNWL staff who have voluntarily joined the frontline having previously been largely office-based.

Two volunteers, Mark Butcher and Kirsty Chestnutt, worked at the St Pancras Rehabilitation Unit. Mark has now returned to his work but Kirsty is still with us.

“Kirsty and Mark’s presence on the ward has made a huge difference.

“They have both approached every request with a “can do” attitude.

“They have enthusiastically set up processes for virtual visiting and in doing so have got to know our patients and their support network. This has added to patient well- being enormously.

“They have  supported families to  virtually work with us in rehabilitation contacts as well as preparing for discharge back to the real world.

“How did we manage without these essential roles – they literally make such a difference. No job is too small and even requests to courier essential kit to  the unit have happened within 30 minutes; such as the request to pick up swabs from a local acute lab.

“They have acted as a fresh set of eyes helping us to look at what we could do differently.  Their energy is infectious!”

Tariro Gumbo, Volunteer Services Manager said: “Volunteering has been well received across the Trust and it’s inspiring to work with teams that are enthused and excited by the prospect, continually seeking excellence within CNWL. Carole and the team displayed true CNWL values, partnering with our volunteers and empowering them to take an active role. The team quickly put Mark and Kirsty to task, identifying ways that they could enrich service delivery, always putting our patients are the centre of it all.

Evidently, it’s the little things that can make a big difference and I love that – like in this case, using everyday technology to connect patients with their loved ones, chatting with patients over a cup of tea or even offering a friendly listening ear when needed.

The NHS is a much loved treasure, it’s clear to see based on the wonderful response from the community to volunteer and support CNWL during this Covid crisis. I am proud of each and everyone of our volunteers and equally so of my colleagues that continually embrace volunteering, holding the NHS banner with pride

Here are Mark and Kirsty’s thoughts: 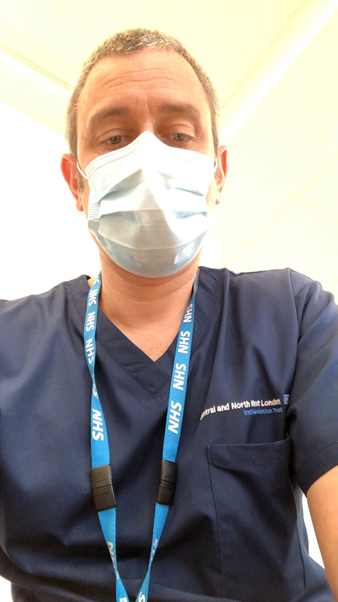 "Teamwork is vital. That is one of the most important lessons I learnt during my 24 years in the British Army and something that I continue to recognise now that I run my own company.

“Working together and each individual doing their bit, no matter how big or small that bit may be, to the best of their ability gives us the best chance of achieving success.

“My wife has worked for the NHS for years, most recently within the school nursing team in CNWL until being redeployed to the Kensington and Chelsea Community Independent Services team. She was part of a huge team, working extremely hard to help people during the biggest threat the world has faced in a century, why wouldn’t I want to become part of that team and help wherever I could. (It was definitely nothing to do with being an alternative to home schooling our 16 and 13 year old daughters!)

“After a couple of weeks I was asked whether I’d be willing to help out in a new role at St Pancras Hospital, would I be a Ward Assistant. Having zero clinical training and absolutely no idea what the role would involve, I of course said “Yes”. I did feel slight trepidation on my first day, as you do with any new role, which did increase slightly when I was asked whether I was happy to work on a wing where most patients were Covid positive, but the competent and professional attitude shown by every single person I met from the ward housekeeper to the senior management put my mind at rest. As the ward assistant is a new role there were no dedicated roles and responsibilities and the best way to describe it is probably to give some examples of tasks carried out by myself and Kirsty, the other volunteer ward assistant. We initially tried to take as much pressure off the ward staff as possible by answering phones, helping the ward housekeeper, paper work and filing, laminating (lots and lots of laminating), helping to feed patients and just talking to them and providing company as they currently have no visitors at all.

“Both myself and Kirsty have a strong IT background and we were asked whether we could help to put the hospitals new iPads to good use and try to arrange ‘Visits by Video’ for the patients. Of course this needed to be underwritten by reams of Policy (like within any decent Government department) and this is where Kirsty really brought her A game and within a single late shift the entire Policy, Operating Procedures and Security documentation was produced. This allowed the visits to start the very next day. During lockdown the use of FaceTime, Zoom, Skype and other video messaging platforms has become common place for most of us, but some of the patients on the ward had not had those luxuries for some time, if ever.

“It was with mixed feelings that I had to step back from the NHS and return to my ‘real’ job this week, after only two extremely rewarding weeks that went past in the blink of an eye, but things are far from back to normal and I hope to be able to spend some more time on the ward over the next few weeks. But Kirsty and the other ward assistants at different locations around CNWL have already become vital parts of the team and continue to provide whatever help is asked of them and make a positive difference for the patients during this hard period.

“For my part I wasn’t surprised at the levels of professionalism I witnessed by every member of staff I met, but I was certainly impressed and am extremely grateful for the opportunity I had to be part of such a hard working team.”

“I was made redundant after 15 years just before the lockdown (not COVID-19 related) so I had a little financial security going into the crisis.

“I decided to leave paying jobs for those that needed them and signed up to volunteer with CNWL, Barts (my local Trust) and the general NHS call.

“I found that CNWL were most pro-active in recruiting, within a couple of days of signing up, I was contacted, interviewed over the phone and soon I'd done basic on-line training and real-life breakaway training, they also sorted out my DBS certification. They also provided a 'psychological preparedness' session where we bring up issues on our minds

“I was on breakaway training with many redeployed NHS staff, I was so impressed that school nurses were preparing to work elsewhere. Since I've been on ward, I've been amazed at the work the redeployed staff have been doing on Rochester West. The majority of stuff appear to have come from other areas (eg Sexual Health and Children's services)

“My main worries going in were about unknowingly spreading the virus (no testing available, we were advised to take our temperature every day to monitor our health) and, as quite an introverted person, finding the energy to interact with lots of new people. I've never been great at small talk and chatting

“I found the first couple of days difficult, I felt sad and angry about what was going on and was also upset about the homeless patients.

“Alongside the pain and anger I was incredibly impressed with all the staff dealing with the situation with professionalism and genuine care, often far outside their usual area of experience. Everyone was very kind to Mark and myself and we were made to feel very welcome

“As we rolled out the video visits system, it's been a joy helping families see each other, sometimes for the first time in months. On one call, a Grandmother got to see her two week old grandchild for the first time and on another a man saw his wife and burst into tears (as did I)

“I've enjoyed doing lots of little jobs, especially (as an enthusiastic cyclist) a bit of couriering of bits and pieces around the place

“All in all, it's been an emotional rollercoaster - the joyful bits balanced with the sad ones.”